How to unlock a miter saw

In the woodworking industry, there’s hardly a power tool that can be compared to the miter saw. Powerful, versatile, extremely useful, and easy to transport tool that every aspiring woodworker should have in their workshop.

Most of the qualities named above that adorn the miter saw, wouldn’t have been said if it wasn’t for the saw’s numerous features alongside its smart and compact design. And one of those features is the main talking point in our guide – the locking/unlocking mechanism. This feature allows users to easily “pack” or “unpack” their miter saw depending on the situation.

For example, to have safe and easy transportation from one jobiste to another, professionals lock their miter saw while carrying it and unlock it afterward. While people who don’t often change jobsites and mostly use their workshop, also take advantage of this feature. But, they do it to conserve space by locking the miter saw while not in use.

Using the locking pins also come in handy during cutting operations because it allows users to adjust the angle of the cut by locking the head or blade.

Professional woodworkers and more experienced DIY enthusiasts who own a miter saw, probably already know all the tricks and tips around this feature. However, if you are a novice woodworker who just acquired your first miter saw, you are probably wondering – how to unlock and lock this thing?

That’s why, to help you with this problem – in this guide we’ll talk about how to unlock a miter saw and miter saws in general. But before jumping to the main point, first, let’s get to know the miter saws better.

How to Lock and Unlock a Miter Saw - Guide

To lock or unlock a miter saw is a simple process that will not take you long to master. In general, all miter saws have the same or similar processes for unlocking or locking the tool.

However, this shouldn’t worry you. Because the differences are minor and usually it boils down to the position of the locking pins and knobs on the saw.

How to Unlock the Head

Some models may have a knob, pin, or lever that you need to push, pull, twist, or swivel. And in most situations, all of these locks require the user to apply a bit of pressure on the head to unlock them.

That’s why, after you locate the knob, pin, or lever, apply some pressure on the head and begin unlocking it. You’ll easily be able to pull the pin out or twist the knob on a compound miter saw.

On a sliding miter saw, however, you’ll need to loosen the lock on the slide.

How to Unlock the Table/Base

The next thing you want to do after unlocking the head is to unlock the table/base of the saw. To achieve this, you need to find the lock on the saw’s table/base.

Luckily in most miter saw models, finding this lock is super easy because it’s one big knob located at the base of the tool. All you have to do is to twist the knob in order to loosen the base and set it at the preferred angle.

On top of that, modern miter saws have preset angle positions so you won’t have trouble aligning the table/base at the right angle.

How to Unlock and Lock the Bevel

Even though compound miter saws are designed to make bevel cuts just as they can do miters, crosscuts, or compound cuts – not all come with a moving bevel feature.

The bevel lock is usually located near the base/table and it can be in a form of a lever or pin. If it’s a pin, you’ll have to push it and tilt the bevel until you find your desired angle. While if it’s a lever, hold the handle, press it, and release until you find the right angle.

You can also use the preset angle positions (45 to 90-degrees) on the table/base of the tool for better accuracy.

How to Unlock the Angle Locks

To completely unlock a miter saw’s potential, you also need to unlock the angle locks. As you may have guessed, the purpose of the angle lock is to control, well… the angle.

The other lock is a lever that can be found close to the knob. This lever locks the preset angle which you can unlock/release by pushing the lever’s handle.

This type of knob lock can be found on most DeWalt miter saws and any other saw that allows users to alter the blade’s cutting angle.

To unlock the knurled knob is a very simple and easy process. All you need to do is to twist the knob in an anti-clockwise direction to unlock a certain part of the miter saw.

On most miter saws, you can find the blade lock on the back of the tool. And since the lock is normally a pin, the unlocking process is very easy.

To unlock the blade, you’ll need to apply pressure on the saw’s head and pull the pin for a successful mission.

Unlocking a Down Position Lock

The down position lock is one of the most important locks when it comes to safety. Especially during transportation of the saw or when it’s not in use.

This simple knob makes sure that the blade guard cover stays on while the blade’s teeth are pushed under the saw’s table.

Unlocking a Push or Pull Lock

This is another easy and straightforward step that is done as the lock’s name suggests. Meaning, whether you want to lock or release the blade, you’ll need to push or pull the pin lock.

What is a Miter Saw?

Cutting a workpiece with a miter saw isn’t that difficult as well. You start by placing your workpiece securely on the board, then position the pivoting arm together with the mounted circular blade under a desired angle and begin cutting.

When it comes to miter saw types, we can differentiate a few:

All of these types have their advantages and features that are best for certain job tasks. That’s why you need to choose the correct one depending on what you intend to use it for. However, more detailed information on these miter saw types later in the guide

If you didn’t know – in the metalworking and woodworking industries, the miter saw is also commonly known as drop or chop saw. And there’s a reason why some people refer to it with these names, even though it’s the same power tool.

Namely, the miter saw uses toothed blades up to 12-inches in size, mostly for cutting wood. But when you remove the blade and add a toothless abrasive disc that isn’t smaller than 14-inches – then the miter saw becomes a drop/chop saw. Miter saws with abrasive cutting discs a.k.a. chop saws are mainly used for cutting harder materials like metal, tiles, or concrete at a 90-degrees angle.

With a quality miter saw in your workshop, you’ll find yourself using the table saw and circular saw less and less.

As we previously said, all miter saws have the same or similar unlocking process, and the main deviation occurs between different miter saw models or types. The process to unlock a DeWalt model may differ from the Milwaukee one, but that’s mainly due to the manufacturer’s design.

However, when it comes to the basic non-modified miter saw types, the unlocking process is as in the instructions above.

Before the powerful miter saw tools we know today, there was a non-powered simplified version of it. It consisted of a miter box that served as a guide for a hand saw to make miter cuts at 45 and 90-degrees.

Unlike the chop saw we mentioned earlier in our guide, this miter saw can cut at many more angles than just 90-degrees. With its power, you can easily make straight crosscuts in numerous workpieces.

The main difference between a compound miter saw and the standard one lays in the ability of the compound saw to tilt the blade and the head at various angles. This feature allows it to easily make bevel cuts.

However, single bevel compound miter saws can tilt their head and blade in one direction up to 90-degrees.

As you may have guessed – double bevel compound miter saws can effortlessly pivot on both sides of the board up to 90°. However, they are bigger, more expensive, and less portable.

For more information, read our guide on Single vs Double Bevel Miter Saw

Sliding miter saws come with a rail that allows moving the saw’s head in a backward and forward motion. Thus, giving it a bigger cutting capacity and the ability to lock the rails so it can act like a chop saw for greater versatility.

For improved accuracy and visibility, while cutting various materials, some miter saws are equipped with laser and LED lights.

The LED lights brighten your workspace, while the laser creates a line across the workpiece to help you easily cut it.

Another very important part of the miter saw is its blades. Because without a quality saw blade equipped on your miter, you won’t be able to do even the simplest of tasks successfully.

Miter saw blades come in various sizes and you can usually find them from 6-1/2″ to 12-inches. The most common blades in the woodworking industry are the 10″ and 12-inch ones due to their cutting versatility. Smaller blades have their advantages but are limited to certain types of cuts.

Additionally, the blade’s teeth count also plays a big role in deciding its quality. If you are wondering why – it’s because miter saw blades have 24 to 100 teeth in general. And the number of teeth matters because it indicates for what type of cutting tasks the blade was made for.

Besides the blade’s number of teeth and size, its material shouldn’t be overlooked as well. Because the material tells us about the blade’s quality, durability, and if was made for cutting wood or metal.

As you can see, unlocking a miter saw isn’t rocket science. The process and its steps are quite simple and easy to master, even for people who have never worked with a miter saw in their life before. Just make sure you have the miter saw’s power cord unplugged from the electrical socket before starting to lock/unlock it.

Now that you know how to unlock a miter saw, we wish you great success in your future cutting projects! 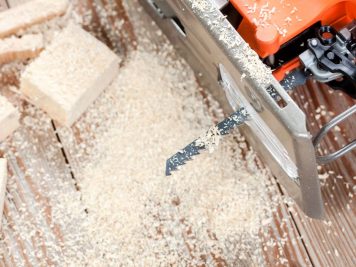 How to Change a Jigsaw Blade

Similar to all hand or power tools used to cut a variety of materials, the jigsaw also requires regular maintenance. 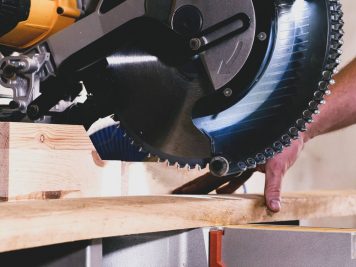 How to Change Miter Saw Blade

If you are a beginner who recently started using the miter saw, you probably aren't that familiar with the blade replacement procedure. 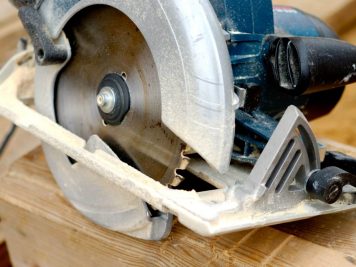 How to Change a Circular Saw Blade

To help you replace the old worn blade with a new sharp one, in this guide we'll be talking about how to change a circular saw blade.