How to Change a Jigsaw Blade

Similar to all hand or power tools used to cut a variety of materials, the jigsaw also requires regular maintenance. And one of the most important parts of the tool that needs to be regularly maintained is the jigsaw blade.

Because with frequent usage and demanding cutting tasks, the blade only gets duller and duller. And as we all know, you can’t cut anything with a dull blade. Therefore, it’s best to either sharpen or change the jigsaw blade.

But unlike circular saw blades, jigsaw blades aren’t meant to be sharpened since they are relatively cheap to replace, plus their teeth aren’t suitable for sharpening as well. So, the best thing you could do with a worn-out blade on a jigsaw is to replace the blade, instead of trying to sharpen it.

However, if you are a beginner who recently started using the jigsaw, you may not be familiar with the blade changing procedure. That’s why in this guide we’ll be talking about how to change a jigsaw blade.

We’ll begin by giving a little introduction to jigsaws, followed by the types of blades and steps needed to complete the blade changing task, just to finish with the features it has to offer.

What is a Jigsaw?

A jigsaw is a power tool that uses a reciprocation saw blade powered by an electric motor to cut various materials. With it, you can easily make irregular or straight cuts in metal, wood, plastic, steel, ceramic, and other similar workpieces.

Also, akin to the miter saw, some jigsaws have a beveling function that allows the user to make angled cuts up to 45-degrees.

As an idea, the jigsaw came into existence in the 19th century when woodworkers used a machine powered by treadle to move the blade in a reciprocating manner. But it wasn’t until 1947 when a Swiss engineer in the name of Albert Kaufmann invented the modern jigsaw.

Since the jigsaw is powered by an electric engine, we can differentiate two main types: corded and cordless. By their names alone, we can tell that one of them uses a cord and the other doesn’t.

The corded type requires to have its cord plugged in an electrical socket for the engine to start. While the cordless one uses rechargeable batteries that power the tool.

But in general, both types have their pros and cons. And in the end, everything boils down to how you plan to use it.

For example, cordless jigsaws have a limited usage time due to their batteries. However, in return, you get the freedom to take them wherever you want and cut as long as the batteries last.

While the corded are limited with their operating space due to the cord. But on the positive side, they can run the whole day if needed. As long as it’s plugged in a power outlet, of course.

Another characteristic that separates these two types is their ability to handle heavy-duty work. This trait usually convinces people to go for a corded jigsaw because it can cut easily through stronger and thicker materials, unlike the cordless one.

Types of Jigsaw Blades & their Material

Depending on the model, we can distinguish two types of jigsaw blades: T-shank and U-shank.

In general, modern jig saws have a universal slot that accepts both T and U shank blades. Older jig saw models on the other hand, only accept U-shank blades. However, in the professional world, woodworkers mainly use the T-shank blade.

But when preparing your tool for a cutting project, you need to look deeper than just the shape of the blade. For instance, the material of the blade tells us its main purpose:

Besides the material, you also need to pay attention to the blade’s thickness and tooth design among everything else that informs us about the type of cuts it can make.

Why Should You Change a Jigsaw Blade?

When it comes to reasons for why you need to change a jigsaw blade, we can point out a few major ones.

Apart from the obvious cause for the blade being dull or damaged, another big reason to change the blade is due to the material being cut.

Because just like most cutting tools, jigsaws as well use a different type of blade to cut metal and wood workpieces. Meaning, you can’t cut a metal workpiece with a blade meant to cut wood. And to find out the type of cuts the blade can do the best, check the material it was made from.

For example, use an HSS blade to cut all types of metal as shown in the blade material section above. Don’t use an HCS blade to cut harder materials, and then blame the tool for not being able to cut the workpiece.

To summarize – you need to change a jigsaw blade because:

If any of these three reasons apply to your blade situation, it’s time to replace it with a new blade.

How to Change a Jigsaw Blade?

Depending on the jigsaw type and its features, the steps to change the blade will differ from one type to another. Whether the difference lies in the tool’s corded or cordless design, it not having a tool-less blade changing system, or if the blade has a T-shank vs U-shank shape, in all situations you’ll have to follow the instructions closely.

The blade changing steps can also differ due to unique designs from the manufacturers. Models from DeWalt and Bosch will most likely have a separate approach to the process. So make sure you check the tool’s manual as well.

The biggest distinction in the blade replacement procedure, however, can be seen between older and newer jigsaw models. Concretely speaking, the newer models come with an amazing feature that doesn’t require the operator to use hand tools to change the blade. While older models need an Allen key or a screwdriver to replace the old with a new blade.

Moreover, it’s of the highest importance to disconnect the jigsaw from all electrical power sources before changing the blade. This also brings us to the next distinction in the blade removing process.

For instance, cordless and corded jigsaws have a different initial step when removing the blade. To change the blade on the corded type, you first need to unplug the cord from the electrical outlet. While at the cordless one, you need to remove the batteries before continuing to change the blade.

After making sure that you disconnected the jigsaw, you can safely proceed to remove the blade.

Replace the Blade on a Jigsaw without a Tool-Less System

Unlike modern jig saws, the older models don’t come with a tool-less blade changing feature. Instead, these models require old-fashioned hand tools to remove the blade and replace it with a new one.

To change the blade in this situation, you’ll need to loosen the screw by using a screwdriver or an Allen key.

Now that you removed the old blade, it’s very important to figure out the right direction the new blade should face before installing it.

To find the correct direction a new blade should face is fairly easy. Just make certain that the cutting teeth face away from the jigsaw and you are good to go.

After removing the old one and figuring out the direction the new blade should face, it’s time to mount it on the jig saw.

Replace the Blade on a Jigsaw with a Tool-Less System

To change the blade on a jigsaw with a tool-less system, you don’t need an Allen key or a screwdriver. Just follow these few simple and easy steps.

Just like on older jigsaw models, the same rules apply to the newer versions as well. Make sure that the teeth on the blade are facing away from the jigsaw i.e. in the direction of the workpiece.

Because not only a blade facing in the wrong direction is ineffective and useless but is also dangerous for the user.

Since most modern jigsaws use a T-shank blade, they also come with the ability to change the blade without needing tools. Therefore, the blade changing steps for jigsaws with a tool-less system mostly applies to those who use a T-shank blade. However, newer models can accept both types of blades.

What to Look for in a Jigsaw?

When searching for a jigsaw to purchase, one of the first noticeable differences between various models lies in their design and shape of the handle.

Based on that distinction, we can differentiate two types of jigsaw handles:

On top-handle jigsaws, we can immediately notice a prominent semicircular handle above the engine’s case. While on those with a barrel grip handle, there’s no such thing since the engine’s case acts as the handle.

Due to their ease of use, D-handle jigsaws are the more common type, and beginners love them. However, they are primarily used for doing basic cuts, and users may experience trouble handling it when making tighter cuts.

That’s why professionals usually prefer using the barrel grip handle model since it can make precise cuts, even though it’s harder-to-control.

The vast majority of modern jigsaws come with a myriad of excellent features that adorn the tool. These features also make the whole experience of operating the power tool more pleasant and easy-to-use.

Features to pay attention to:

May interest you: Jigsaw vs Bandsaw [Comparison]

After frequent usage of the tool, the time to change the jigsaw blade will eventually come. And when the time comes to replace it, you need to be ready for the task.

But as we can see from this guide, there’s nothing to fear even as a novice. The steps to change the blade on a jigsaw are relatively easy, and it won’t take you more than 10 minutes to finish the job. However, assure that you have the correct blade for the upcoming tasks and follow the safety protocols.

Hopefully, this guide helped you to better understand the jigsaw and its blade changing procedure. 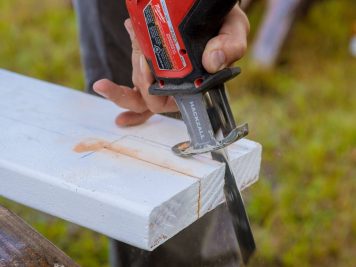 In this article, I test and review the best cordless jigsaws on the market, looking at how they perform on different materials. I’ll describe the pros and cons of each so that you can select the one that best suits your needs. 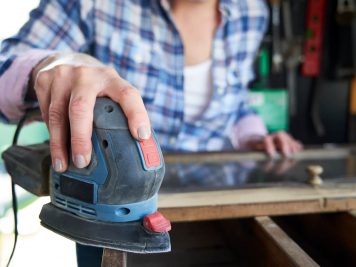 In this guide, I road test the eight best sanders on the market in a real-world environment and tell you how they perform. 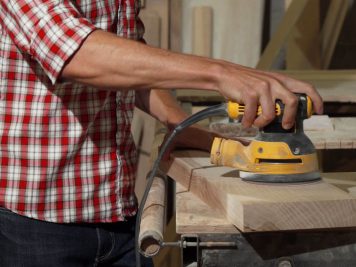 Whether your favorite household furniture is starting to look a bit tired or you’ve picked up a diamond in the rough from a yard sale, you need the tools and know-how to restore them to their former glory.